Investment Insights Blog: Markets In Review—What Happened in the First Half of 2022

Lay of the land

Extreme market volatility shook investors in the first half of 2022. Themes driving the markets’ declines included high inflation expected to continue; increased rates from the U.S. Federal Reserve (Fed); the ongoing war in Ukraine; and fears of an economic recession.

Both equities and fixed income markets experienced 10%+ losses, a rare occurrence I wrote about back in May. Year to date through June 30, the S&P 500 (U.S. equities) is down 20.0%, the MSCI EAFE (international equities) is down 19.6%, and the Bloomberg U.S. Aggregate (U.S. bonds) is down 10.3%. The Bloomberg Commodity Index—one of the few asset classes that can hold up against high inflation—is up 18.4%.

The S&P 500’s decline is its greatest since February–March 2020, which was 35.4%. At 176 days and counting, it is also the longest since the 267 day fall witnessed from 2015–2016. For fixed income, the 10.3% decline in the Bloomberg U.S. Aggregate is the worst start to the year in history. Not surprisingly, this resulted in significant negative performance for traditional 60/40 (equity/fixed income) diversified portfolios.

Equities and bonds both experience losses

The table to the right shows the annual performance of a 60/40 portfolio over the last 44 years, using the S&P 500 as a proxy for equities, and the Bloomberg U.S. Aggregate as a proxy for fixed income. Through June 30 the loss of 16.1% is second only to the 2008 Great Financial Crisis loss of 20.1%. It is important to note that this is for comparative purposes only, and all other years are using 12 months of performance (2022 is only the first six months of the year).

It is rare for equities and fixed income to suffer such sharp losses concurrently—typically these asset classes are less correlated. Sharply rising fears of inflation—the likes of which we have not seen in 40 years—impacts the performance of both asset classes, leaving very few places for investors to hide.

Rising inflation triggered one of the sharpest upward moves of U.S. Treasury yields in history. As yields rise, the prices of bonds fall, which helps explain bonds’ double-digit year-to-date performance. 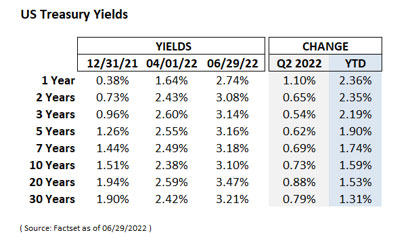 While inflation is top-of-mind, as it is tangibly observed in our daily lives, we may be close to the peak. The five-year inflation breakeven rate—a measure of expected future inflation—hit 3.59% earlier this year, but has since fallen to 2.60% at the end of June. This real-time indicator implies that we should see lower inflation over the next several years.

The Bloomberg Commodity index is up over 18% through June 30, but down roughly 16% from its peak earlier this year. It is often said “the cure for high prices is high prices,” because high prices typically lead to lower demand. In May, retail sales experienced the first decline of 2022, evidence of lower spending from consumers. That said, we will have to wait to see how far and fast inflation will fall. There are other nuanced factors, such as the supply chain constraints lingering from the COVID-related economic shutdowns, that continue to complicate market and economic dynamics.

U.S. economic growth as measured by Gross Domestic Product (GDP) fell 1.5% for Q1 2022, the first down quarter since the COVID-19 Q2 scare of 2020. The Atlanta Federal Reserve’s GDPNow is forecasting GDP negative growth of 1.0% in Q2, with the Commerce Department’s first reading of GDP to be released at the end of July. If the Q2 GDP is negative, as currently expected, the U.S. will have fallen into a “recession,” defined as two consecutive quarters of negative real GDP.

Given slowing economic growth and high inflation, it is no surprise that consumer sentiment is negative. The University of Michigan Consumer Sentiment Index fell to 50.0 in June, the lowest number since the survey launched in 1940. That said, my colleague Frank Holsteen recently wrote about how levels of extreme consumer pessimism can be contrarian indictors of future above-average market returns. Stated differently, when investors are excessively bearish, historically it has shown to be an opportune time to invest, or as Frank’s blog states, “stock prices that overshoot the downside, create the potential for superior price appreciation from that point forward.” To further support this perspective, in 19 of the 21 stock market corrections since 1950, leading indicators, like consumer sentiment, bottomed before markets rebounded.

The Federal Reserve and interest rates

Back in 1994, the Fed’s rate increases were “getting ahead of the curve,” or responding to 4% (high) economic growth and 2.7% (normal) inflation. Today, the Fed is “behind the curve,” with inflation running over 8%, while short-term rates are just 1.50–1.75%. Further expected Fed rate increases being priced into markets include1:

While there are many uncertainties that will continue to weigh on sentiment and further volatility in the short-term, there are some positive signs. For bonds, much of the move in yields in response to elevated inflation has already happened or been priced in, and if inflation is indeed peaking, yield curve volatility should dissipate.

The historical perspective—markets and the Multiple Asset Fund – P Series

While record market declines have framed the narrative for the first half of 2022, it helps to look at history for some perspective. We frequently use the following chart, which shows the S&P 500’s performance—the grey bars represent calendar year returns (for 2022, through June 30) and the red dots show the largest intra-year, peak-to-trough drawdown.

Since 1980, the average S&P 500 drawdown is 14% (with maximum drawdowns ranging from -49% in 2008 to -3% in 1995/2017), and the average calendar return is 13%. Put another way, over the past 42 years, the average return for the S&P 500 was 13%, however during the year, on average, there was a peak-to-trough decline of 14%. This is a great visual reminder that drawdowns are completely normal and in order to achieve overall positive, long-term performance, an investor needs to assume some level of short-term risk. 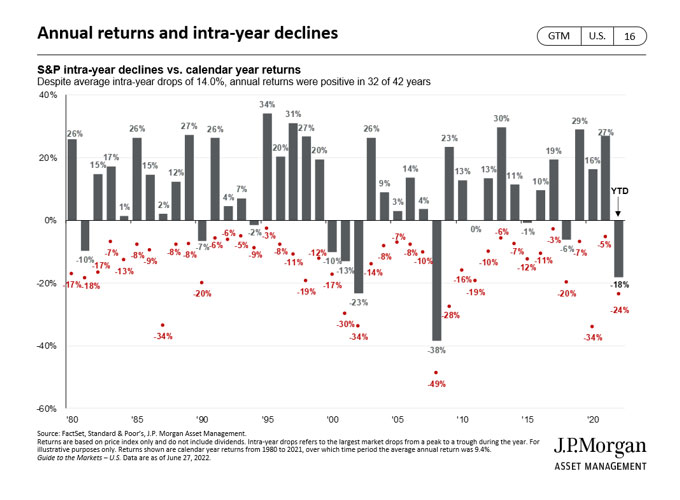 From this chart, we can make several key observations:

Earlier we mentioned that the U.S. economy is teetering into a recession, with a -1.5% GDP print in Q1 and an expected negative growth report due out July 29. If we find ourselves in another recession, we must continue to keep it in perspective. In commentary released last week, J.P. Morgan Asset Management’s Dr. David Kelly pointed out that since 1946, the average recession has lasted for 10 months, while the average expansion has lasted for over five years! While recessions are challenging to live through, historically they are short-lived.

We know market volatility is understandably unsettling. We hope our investors take comfort in the fact that we will continue to maintain a disciplined strategy of managing diversified investments. We believe market timing is an exercise in futility, and the key to a long-term successful investment program is to remain fully diversified and invested, positioned for the long term. History has proven—during 2008–2009 and again in 2020—that adhering to a disciplined strategy is the best policy—it works.

We will continue to closely monitor ongoing market volatility and economic factors. Please contact our team at [email protected] with any questions you may have.