It has been a long time since we genuinely worried about inflation. The last time we saw double-digit inflation was 40 years ago, in 1981, when the U.S. annual Consumer Price Index reached 10.3%! 1

In 1981 I was 10 years old, in the 5th grade. The music charts featured songs like “Bettie Davis Eyes” by Kim Carnes and “Jessie’s Girl” by Rick Springfield. On the weekend, you were headed to see “Raiders of the Lost Ark” and “The Cannonball Run” at your local movie theater. Several members of the Wespath client service team were not even born!

This trip down memory lane should remind you that is has been a very long time since we have witnessed the level of inflation markets are currently experiencing.

Ironically, for the past two decades, we have been more concerned that inflation has been too low. Even as the U.S. economy grew following the 2008–2009 Great Financial Crisis, inflation did not rise to levels previously witnessed with economic recoveries. From 2012–2021, globalization, technological progress, economic productivity and demographic shifts kept inflation near or below the Fed’s 2% average inflation target.

Why do central banks fight so hard to keep inflation at bay? Inflation erodes consumers’ purchasing power as goods and services become more expensive. If wage increases can’t keep pace, financial conditions can deteriorate. The lowest wage earners are often hit the hardest, especially when inflation is concentrated in basic necessities such as food, energy and shelter.

From an investment perspective, inflation, as we are currently witnessing, is a headwind for both stocks and bonds. Central banks typically respond to rising inflation by increasing interest rates, often referred to as “monetary tightening.” Monetary tightening makes borrowing more expensive, which leads to a slowdown in economic growth, resulting in lower demand for goods and services, ultimately reducing inflation. And as we know, higher interest rates generally mean lower bond prices.

Inflation is also a headwind for stocks. As monetary policy tightens to fight inflation, economic growth slows. This leads to lower demand for goods and services, eroding corporate earnings and often leading to job losses.

One of the few places where investors can hide during periods of rising inflation is commodities. When the demand for goods and services is accelerating, as we have witnessed over the past 18 months, the cost to produce goods that rely on commodities also rises. Hence, commodities are seen as one of the few hedges against inflation. Commodities, represented by the Bloomberg Commodity Index, gained 30% this year through April. The Wespath Inflation Protection Fund (IPF) has a 10% allocation to commodities and through the end of April has produced a positive return of roughly 1%, while other funds have experienced losses.

Below is a chart of bond market drawdowns (peak to trough declines) since 1976, the year the Bloomberg Aggregate Bond Index (Bloomberg Aggregate) was created. The current drawdown is the sharpest drawdown in 40 years, which is also the last time the U.S. economy experience a sharp spike in inflation. 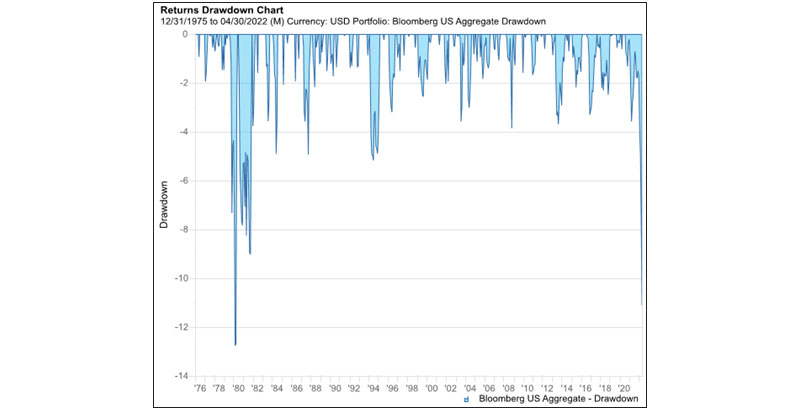 Looking at data from one of my Twitter follows, @charliebilello, we can see below that over time equity markets have experienced drawdowns (again, peak to trough declines) of 30%–50%. Bonds, however, rarely experience drawdowns of 10% or more. This chart presents monthly returns back to 1976. It shows this is the first time ever that both stock and bonds are concurrently in a 10%+ drawdown. The S&P 500 is down over 14%, while the Bloomberg Aggregate is down 11% from its 2020 high.

Another chart from @charliebilello shows that typically in non-inflationary times, when equities experience sharp losses, bonds will act as a ballast for the portfolio. The recent high positive correlation between bonds and stocks is rare. In the eight stock market drawdowns in the table below, bonds provided downside protection, which shows why bonds play an important role in a diversified portfolio. Unpredictably, this is not the case in 2022, with both bonds and stocks down 10% largely due to inflationary pressure and rising rates.

It has been a two-year market rollercoaster for investors—from the impact of COVID to the effects of continued global unrest and sharply higher inflation. Just as we could not predict that the S&P 500 would produce a return of 20% in 2020, following a 34% drop in February–March 2020, we could not have expected to witness the economic and market dynamics resulting in simultaneous stock and bond declines.

As the markets slowly adjust to inflation, and as the Fed implements measures to address it, we expect continued volatility. However, we also know that market timing is a futile effort. This is why Wespath remains a patient investor, full invested and fully diversified, positioned for the long-term. History has proven—during 2008–2009 and again in 2020—that adhering to a disciplined strategy is the best policy—it works.

Wespath understands that market volatility swings can, understandably, be unsettling. All should take comfort in the fact that Wespath will maintain its disciplined strategy of managing diversified investments. We continue to monitor the current episode of market volatility and will continue to provide additional perspectives about the impact of events on the economy and markets.