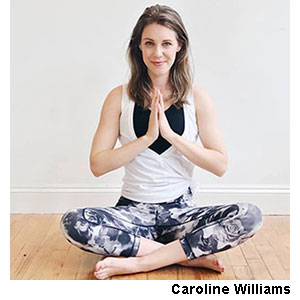 Believe It or Not, Christians Can Do Yoga. We Explain How.

Caroline Williams led an active lifestyle. She was a runner, played sports and performed Pilates. However, when she experienced heartbreak as a young adult she gravitated to yoga. And something unexpected happened in the process—she made a connection with God.

It first happened when she was in college after her boyfriend broke up with her. And it occurred again a few years later after Williams entered the workforce and discovered she was miserable in her chosen career path. She went to church and journaled and asked God to help her discern her true calling, but she wrote on her website that she did not hear an answer. Until she reconnected with yoga.

In the intervening years, Williams has used her website and her YouTube channel—which has over 48,000 subscribers—to share her story and to make the case that yoga can deepen your Christian faith. In a series of YouTube videos—as well as a recent interview—Williams uses the Bible, the history of yoga and personal testimonials to explain how Jesus can be at the center of yoga.

“Where I really found a home in yoga was it is a very spiritual practice,” Williams said in a video call.“ The heart of yoga isn’t to set goals (like), ‘OK, we’re going to do 10 reps of this today and my biceps are going to grow by this size.’ The goal is union. The word yoga means to unite. There is this strong focus on the breath as sort of that intermediary between our brain and our bodies. But it’s this way of connecting. As a Christian I say, ‘Uniting us with the Lord.’ And this God who isn’t someone that we just see at church on Sunday mornings, but this God who is always around us and in us. And we forget that.

“I think yoga’s focus on uniting those disparate parts of ourselves, this really strong focus on the breath and sort of this relinquishment of earthly attainment makes it a really sweet home for Christians to find connection with God through their bodies in a way that it might be harder to in an aerobics class when there is so much else going on.”

The comments section on Williams’ YouTube videos suggest that her Christian yoga videos help others to quiet their mind and hear God’s voice. Williams said her favorite comments are from people who have been Christians for a long time, including people who serve in the church or are missionaries.

“They’ll say, ‘I just started weeping three minutes into your video. I felt such a weight taken off of my shoulders. I haven’t felt the presence of God in so long and now I feel it,’” Williams said during the recent interview. “It’s no amount of magic on my part. I think it’s like I talked about, this intention of slowing down and being with—and permission to just be with—God and not do things for God or for God’s children.”

If you are interested in trying Christian yoga, Williams shared some insights: