Late in 2020, investors began to notice a shift in leadership in the U.S. equity markets. For the first time in several years, smaller company stocks (small caps) meaningfully outperformed larger companies (large caps). Let’s take a closer look at this trend, which has continued into the early weeks of 2021.

Investors typically use the Russell 2000 index, a grouping of the 2000 smallest public companies in the U.S., as a proxy for small-cap performance. Alternatively, the S&P 500 index, a basket of 500 of the largest U.S. public companies, is often used to represent large caps.

Large-cap stocks, particularly those of mega-tech giants, have led the markets higher over the last few years. In fact, from 2017 through 2019, the S&P 500 outperformed the Russell 2000 by an average of 6.6 percentage points annually. This was also the trend during the first eight months of 2020.

However, starting in September of last year, the Russell 2000 began outperforming the S&P 500, as shown below: 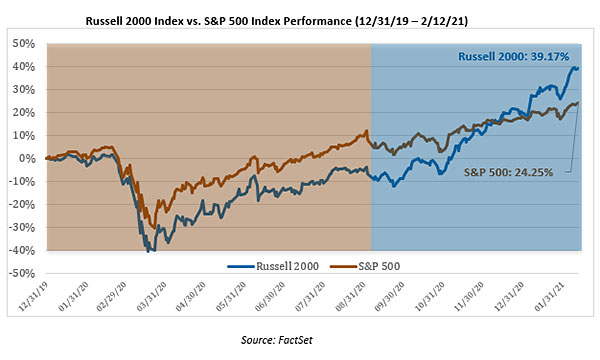 Here’s a closer look at how that outperformance breaks out over several recent time periods:

As seen in the bar chart above, the Russell 2000 has a noticeable lead over the S&P 500 year-to-date and successfully outperformed the large-cap index in Q4 2020, January 2021 and the one-year period ending February 12, 2021. We can also see that the magnitude of the small-cap outperformance has erased the S&P 500’s lead from recent years, with small caps now beating large caps in the trailing three-year period.

The rotation into small caps seems to be led by improving investor sentiment and economic conditions—due in large part to the rollout of COVID-19 vaccines, continued government stimulus and the re-opening of the economy.

Typically, small caps do well in an improving or expansionary economy. Smaller companies are inherently more sensitive to economic conditions because they tend to have less diversified businesses and revenue sources. These companies may also find it more difficult to access credit. Additionally, the small-cap market has a greater exposure to cyclical industries, including industrials, materials and financials which are leveraged in an improving economy.

A key metric that demonstrates this is Q4 earnings growth, which companies are in the midst of reporting. Based on data already published, and estimates for upcoming earnings reports, smaller companies as a group are forecasted to post Q4 earnings growth of 4.3% as compared to 2.9% growth for their larger S&P 500 brethren, according to FactSet.

While this near-term trend is certainly interesting, as long-term investors, we aim to structure the funds managed by Wespath and its subsidiaries to be well-positioned for sustainable long-term performance. Interestingly enough, however, we do tend to think there is a unique opportunity set with smaller company stocks. In fact, analyzing returns over the last 20 years, smaller companies have outperformed larger companies by one and a half percentage points on an annualized basis each year.

For instance, in the U.S. Equity Fund (USEF), we have intentionally implemented an overweight allocation to smaller companies relative to the fund’s benchmark. As such, the recent small-cap rotation has benefited USEF’s relative performance.

If you are interested in learning more about USEF’s s small-cap overweight and our general approach to investing based on market cap, I encourage you to check out one of our latest white papers, “The Small and Mid-Cap Stock Advantage.”